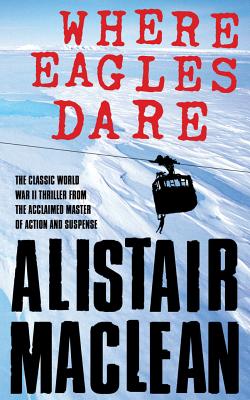 By Alistair MacLean
Email or call for price.
Special Order

This classic World War II thriller epitomizes intrigue and white-knuckle suspense. Seven men and a woman, part of a team of British special forces, parachute onto a mountainside in wartime Germany. Their mission is to enter the seemingly impenetrable Castle of the Eagle, headquarters of the German Secret Service. Once inside, they must save a captured American general before Nazi interrogators can force him to reveal secret D-Day plans. But this daring rescue is not as straightforward as it seems. As team members begin to die, it becomes clear that someone in the group is determined to sabotage the mission. Is there a double agent among them? Where Eagles Dare is an irresistible spy story with a startling twist.

Heroes of amazing strength and resolve, impossible odds, and betrayal where it is least expected are all hallmarks of Alistair MacLean's work. His riveting books, especially those set during World War II or in the naval arena he knew so well, have long enthralled readers, and many of them--including "The Guns of Navarone," "Ice Station Zebra," and "Where Eagles Dare-"-became blockbuster Hollywood films.